THE VISCERAL IMPACT OF THE RED ROSE ALERT

Do you still remember the ecstasy, receiving a bunch of red roses, hoping that this might be sent by that special handsome guy?

If your suspicions were proven right, it had that visceral impact of the red rose alert. Your heart-beat raced, and you knew he is the man after your own heart.

Every shameless romantic at heart, will embrace the symbol of love, the red rose on Valentine’s Day – 14th February.

THE ROSE GARDEN WAS BLOOMING IN EXCESS 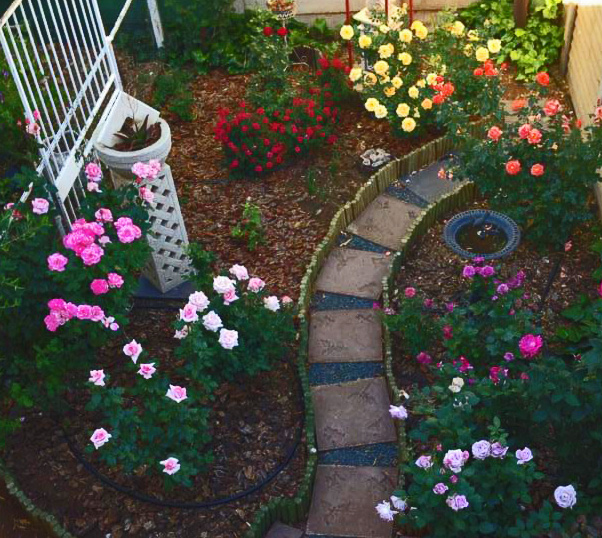 As years slipped by and life took its own course, the RED ROSE ALERT resulted in a joyful artwork. The roses in the small garden bloomed in excess. It was during a hot summer season that the urge to paint these roses plein air, could no longer be ignored. The red roses in the garden reminded me of the visceral impact a special bunch of red roses had.

Red is one of my most-loved colours to work with. The richness, and versatility of reds stimulate emotions, negative or positive.

The palette knife was my exclusive instrument for applying oil colour. I applied the colours thick, (1-1.5 cm in some cases), scooping the half-mixed colours with the palette knife and applied each stroke only once.

For four mornings, at the same time, I did four rose paintings ala prima: red, purple, yellow and pink.

SOME CHARACTERISTICS OF RED PAINT

To create a masterpiece the artist must understand the way colours influences each other, no matter your medium, style or genre.

Red is on the warm side of the colour wheel. Reds differ from each other and some reds are more intense, more transparent or opaque than others. Alizarine Crimson is a cooler red than Cadmium Red. Some reds tend to dry slower than other colours, just to name a few differences.

The artist William Turner (1775-1851) is famous for his unconventional application of colour, to depict a special moment in time. The haziness of the well-known oil artwork Waves Breaking Against the Wind, is a good example (Finlay)

Turner took risks. He knew that the original Carmine bright red colour which he used to create a stormy sea, would not last. Despite well-meant warnings, in his haste to finish an artwork, he would certainly explode, ‘mind your own business!’

Why would the dye not last? The blood of the insect, cochineal on the prickly pear, produced the famous first brightest red dye.

THE BEST GUARDED SECRET OF THE SPANIARDS

The Incas and the Aztecs were the first people to harvest the bug cochineal on the prickly pear plant.

When you squeeze the cochineal bug between your thumbnails, the bug will burst, and the blood will spatter. The Incas and the Aztecs harvested these bugs. Despite the stank of this method, the blood was then used as a dye. They quickly learned the monetary value of this precious dye.

When the Spaniards invaded and colonised these countries, they guarded this secret, the Cochineal Red or Carmine red, for centuries. This exquisite bright red later became known as Spanish Red, was extremely expensive and very scarce.
The wealthy Spaniards did not care that the dye of the cochineal blood would fade the very next day, because the brightness of pigment made a fashion statement. Only the wealthy, powerful and the cardinals could afford it.

The parasite cochineal was killed to save the prickly pear. The blood was used to create a beautiful red colour. The death was necessary in return to preserve life and an income for the inhabitants. The Spaniards gained a wealthy monetary income.

If the Spaniards did not care that the dye would not last, why should William Turner?

RED’S IMPACT IN OUR MODERN WORLD

The colour red is not only about its characteristics for the fine artist but also as symbols in our daily lives.

Thank you for reading this article of RED ROSE ALERT.

You may also be interested in the blog IN SEARCH OF THE LOST CHATEAU: TRAVEL AND COLOUR DEPICTED ON CANVAS.

Editor’s Note: This blogpost was last published in March 2016 and has been completely revamped and updated.

Rewritten by Ia Crous August 2020. The romantic visceral impact of red and roses led to four plein air, ala prima artworks in oil. Red colour evokes many different emotions, from love and war, wealth and poverty, and death and sacrifice. The first bright, but unstable red dye is also referred to as Cochineal, Carmine red or Spanish red.

I am an abstract artist based in Bloemfontein, South Africa. I'm restless, I like movement, I like to travel, and I love people. I love to share my thoughts and experiences in my journey as an artist.

BLOG NO 10: ENCHANTING GOLDEN INTERACTION BETWEEN ARTIST AND VIEWER

THIS ARTWORK IS FOR SALE: VIEW HEREHow can an artwork provoke interaction between the artist and the viewer?Watching from afar during lunchtime, two ladies, unknown to me, one younger than the other, were in a serious conversation. Both were pointing towards the 30+...
Read More

Blog No 9: FROM FINE TO ABSTRACT ART: A SHIFT IN ACCENT OR METAMORPHOSIS?

Burning Desire I lived the emotions in colors while creating this artwork. The process of acrylic and oil paints together with collage transformed the creation into meaning. The burning desire to do the Camino just once in my lifetime never materialized. Freedom to...
Read More

Blog no 4: FIVE MINUTES OR A LIFETIME

Viewers often wonder how long it took to complete a painting. There is no one accurate answer to this. Various factors are to be kept in mind.

Blog no 1: THE POWER, PASSION AND SYMBOLISM OF THE POMEGRANATE

The universal well-known pomegranate plant vibrates power, passion and symbolism. It is one of the most painted fruits. Artists love the shape of the tree, the flower and especially the fruit.

Blog no 3: IN SEARCH OF THE LOST CHATEAU: TRAVEL AND COLOUR DEPICTED ON CANVAS

Travel with friends is an awesome inspiration for artists. Depicting the memoirs on canvas with brush strokes and colours, evoke viewers to engage in conversation.